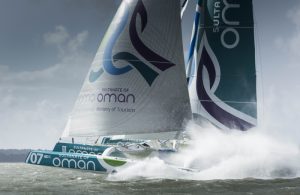 Musandam-Oman Sail, the Sultanate of Oman’s flagship trimaran, will join a small fleet of MOD70s at the start of the Royal Ocean Racing Club’s classic Round Ireland Race on 18 June to kick off the European season. 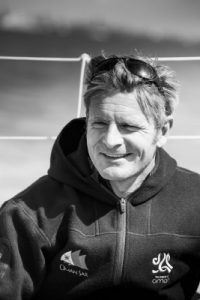 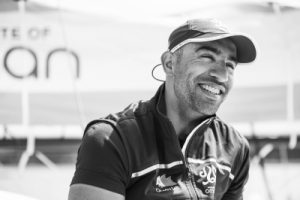 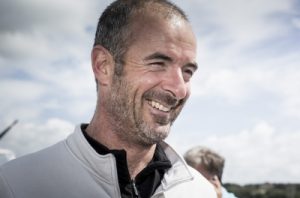 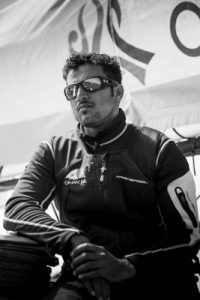 French skipper Sidney Gavignet’s crew of Omani sailors and Irishman Damian Foxall are no strangers to the 700 mile Round Ireland race track having famously smashed the record in 2015 after completing the course in 40 hours, 51 minutes and 57 seconds, some four hours faster than anything achieved previously.

Fahad Al Hasni, Yasser Al Rahbi and Sami Al Shukaili were all on board for the record-breaking voyage and all return to action for the Round Ireland Race.

The team has developed a strong bond, says Gavignet so the prospect of lining up against other professional MOD70 crews in June for the start in Wicklow, to follow a course that leaves Ireland and all its islands excluding Rockall to starboard, serves to stir their competitive spirits.

“This Omani crew has a long history – last season especially was very demanding – so we have a very good team with a great team spirit,” said skipper Gavignet.

“We would like to win the race but know it will not be easy because the other MOD70s have been sailing a lot in the past few months. We have trained hard and the guys are performing at a different level now so we are very happy to go and do our best against the others.

“We hold the record but it is possible to do better and it is likely that whoever wins will set a new record, depending on the conditions. It is very exciting to be racing against Phaedo and Concise – it will be a good contest.”

Preparations for the race have included some intensive training offshore as well as participation in the Grand Prix Guyader in Douarnenez, France, last weekend where the Omani Diam 24 team onboard Oman Airports by Oman Sail finished in 3rd place.

This weekend MOD70 sailors Fahad, Sami and Yasser are due to compete on Oman Sail’s J80 at the Grand Prix Ecole Navale at the French Naval Academy in Lanvéoc to get some crucial fleet race practice.

Success in sailing against the clock for a speed record requires a different mindset to racing in a fleet, said Fahad, Oman’s most experienced and successful offshore sailor.

“Competing with other boats in the Round Ireland race will be different to breaking the record and probably a lot more difficult,” he said.

“The other MOD70s have been training and racing all year and have achieved some good results so they will be hard to beat. But we will be sailing the boat as fast as we can and if we can win, it will be fantastic for us because this is a two thirds Omani crew.”

Records are one thing but when you get two boats racing side by side, the results speak for themselves, commented Damian Foxall, acknowledged as Ireland’s most accomplished ocean sailor.

“This season, our campaigns are all about fleet racing. When you are racing against the clock, you never know if you are performing 100% but in fleet racing, if you are not going 100%, you probably aren’t winning. And you know pretty quickly whether you have taken a good or bad option.

“Fleet racing is more like a game of chess and what the other boats do on the course can affect your own tactics. So you have to be on your game 100% all the time and sail a lot harder. Our guys understand that completely.”

A couple of years ago, Musandam-Oman Sail would have been favourite to win the multihull class, Foxall continued but an upsurge in activity on the other MOD70s means they have a contest on their hands.

“The guys on Phaedo and Concise are sailing extremely well now so a couple of years ago, we might have been favourites but that is certainly no longer the case and we are going to have to compete really hard to get a result this year. But we know how to sail the boat so this is great and exactly how it should be.”