Fortissimo promises a Dream or Two in Volvo Round Ireland 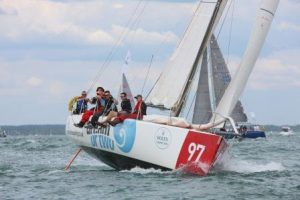 The first generation Class 40 has a usable minimal interior for cruising, yet still has a good all round performance to compete with other Class 40s according to skipper James Close: “What appealed to us about the Class 40 was that they are built specifically to cross oceans in safety. It has to be one of the safest platforms to do offshore sailing from, yet also fast and exhilarating.”

Dream or Two was originally the name of a boat that was used to teach RYA courses in Gosport, before the owner upped sails to explore the world on his boat and passed the RYA school into the capable hands of Jannine Stoodley, who ran it for close to 10 years. The school now offers racing, cruising and day sails on Fortissimo, which was built in 2008 and launched in 2010. She is 4.7 tonnes, and the control and safety with which she operates makes the top speed to date of 22knots even more breathtaking.

James grew up sailing in Portsmouth Harbour in a Mirror Dinghy, before progressing to various racing classes. After university he began crewing in a myriad of weekend races in the Solent for almost a decade, before completing the RYA Yachtmaster Course in 2013. His day job is now Yachtmaster Instructor and Skipper of Fortissimo. (Slightly different to his original intention of becoming a graphic designer!)

What does James love most about being on board Fortissimo?

‘It is superb sailing, as you have ‘seat of the pants’ excitement of dinghy sailing, combined with the ability to go to far afield places relatively quickly. The racing is at sensational speeds, often touching 20knots – yet in complete control. The cruising is revolutionary, as we can comfortably cross the channel in around 6 to 8 hours which means we can have real croissants in France for breakfast and by late afternoon be in a proper pub for dinner back home!’

The tightly-knit crew consists of elite sailors, each one an integral part. Among them is Andrew Smith, one of the directors of Dream or Two Sailing, who has raced around the world as a navigator, and first mate Ben Turner, who is (very usefully) trained as a rigger. With both long-term and new clients of A Dream or Two on board, the combined sailing experience is impressive.

James mentions that he had ‘always dreamed of sailing a Class 40, as it seemed to fill the gap nicely between dinghies and yachts’.

Seems like A Dream or Two has lived up to its name! We’re looking forward to welcoming you and the crew of Fortissimo to Wicklow this month, James!