David Cullen back after 18 years aboard Euro Car Parks

David Cullen, CEO of Ireland’s leading parking provider, credits being useless at football as a kid with his decision to get into sailing.  A native of Raheny, he has come from dragging a canoe and windsurfer down the cliff to Kilbarrack Creek to entering his J109, Euro Car Parks, into the 2016 Volvo Round Ireland fleet. Thanks to his exceedingly tolerant wife Deirdre, he has been able to devote much of his spare time to sailing and preparing for the race.

Describing his crew as ‘friends for life’, they have sailed together on a myriad of different boats, from half tonners to V065s. When asked what they have in common, David answered:

‘Age and baldness, but also a steely determination to win.’ 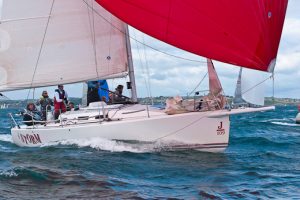 Why are they taking part in the Volvo Round Ireland?

‘It’s 18 years since I won the Round Ireland on Jeep Cherokee, a Volvo 60, so it’s a bit overdue. My upcoming 50th birthday inspired me to do something I enjoyed so many times previously, and the fever has spread to my pals.’

What kind of provisions will the crew be keeping themselves fuelled with?

Well, after sampling a few different freeze dried options, they decided the best plan was to indulge in some of Dublin’s best Asian cuisine. Meals will be prepared by Kanoodle Restaurant to be taken on board. The crew has yet to decide who gets the important task of reheating!

They are looking forward to the breath-taking scenery that comes with taking part in the Volvo Round Ireland, but also to the camaraderie, stories and jokes that will no doubt be shared on board. David  is confident that there will be no arguments while at sea.. unless anyone disagrees with him!

Well, we hope disagreements are kept to a minimum and we’re very much looking forward to welcoming you to Wicklow, David!