After completing two Volvo Round Ireland Races aboard J124 bJaysus, and a few years away from sailing, Alan Hannon is back with Reichel-Pugh 24 Katsu. Bought in Thailand in 2014, Hannon gave her first long run last year, zig-zagging down the Irish Sea to the Solent, building up miles for the 2015 Fastnet. Despite a large clump of weed leading to disappointment and Katsu miles behind her class in the Fastnet, there are high hopes for this June. 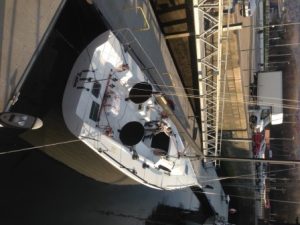 Alan has lined up a seasoned crew, half of whom have multiple Round Ireland experience, as well as extensive Fastnet and Rolex Middle Sea, Round the World Clipper and Sydney- Hobart experience. The crew in fighting form ahead of June’s race, and will have completed considerable off-shore miles with 8 races in their 2016 race program.

And then there’s their secret weapon – Captain Richie Fearon, who was navigator on 2014 overall winner Tanit.

With a multinational crew, hailing from four continents and eight different countries – that’s plenty of national anthems to keep spirits up during low winds!